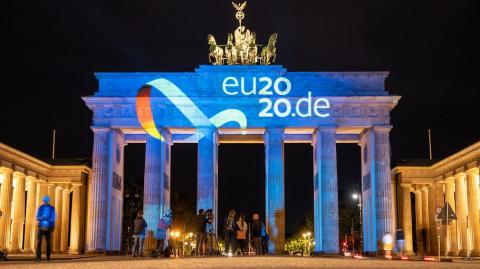 ECSA welcomes Germany taking over the rotating presidency of the Council of the European Union from 1 July, calling on the German Presidency to support a stronger European shipping industry in order to support a rapid European recovery.

“Significant and important developments will have to take place during the German Presidency which will be determinant in Europe’s recovery from the COVID-19 pandemic,” said ECSA Secretary General, Martin Dorsman.

“On behalf of the European shipping industry, ECSA strongly believes the German Presidency will fulfil its role in unifying efforts to bring European economy and European industries back on their feet again, as stated in their slogan ‘Together for Europe’s recovery‘.”

The European shipping industry also welcomes the guiding principles of the Presidency, set by the German Federal Cabinet:

“As a major geopolitical asset to the EU, shipping is certainly prepared to be a key driver in the post-COVID-19 recovery spearheaded by the German Presidency. To do that, we need a strong, competitive and sustainable European shipping sector that creates and sustains jobs and businesses,” continued Mr Dorsman.

Apart from recovery, another guiding principle of the forthcoming Presidency pertains to sustainability. The industry is of the view that the concept of sustainability needs to cover the three main pillars: environmental, economic, and social.

The industry also appreciates the leadership and vision shown by the German Federal government in the fight against climate change.

“European shipping is making great strides in its rapid move towards decarbonisation, and we are already seeing impressive results in certain segments such as maritime passenger transport. But we urgently require concrete R&D results for other segments such as deep sea shipping, in order to reach our goal,” added Mr Dorsman. “ECSA looks forward to working with the Presidency on these targets, based on the recent National Hydrogen Strategy and the Innovation in Transport announced recently by the German Federal Government.”

Taking a regional approach towards decarbonisation should be avoided at all costs. European shipping embraces its climate ambitions, but neither shipping nor greenhouse gases stop at national or continental borders. Comprehensive and sustainable climate protection can only take place at the global level. ECSA looks forward to the EU showing leadership through the German Presidency at the IMO to achieve concrete results.

Last but not least, as the transition period of the UK leaving the EU will terminate by the end of 2020, European shipping hopes that the Presidency will be able to conclude a future agreement that will ensure the continued fluidity of trade between the two, reciprocal market access as well as a level playing field.