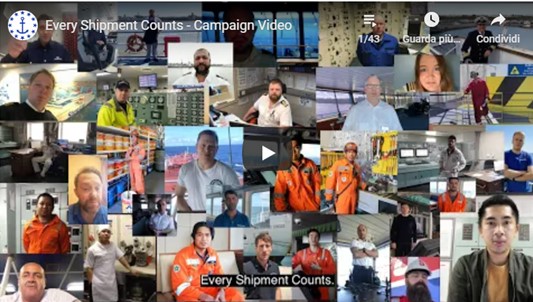 Since the onset of the COVID-19 pandemic, the European shipping industry has been working hard to ensure that goods such as food and medical supplies, as well as energy supplies and the transport services continue to be delivered to millions of EU citizens.

The video showcases maritime workers from across the industry from across Europe, who explain their lives in the past few months in keeping the supply chains running and why every shipment counts.

“4 out of every 10 ships are European. 555,000 maritime workers on board these 23,400 European vessels are working hard every single day to keep societies running and people safe and healthy,” said Martin Dorsman, ECSA’s Secretary-General. “This is why we demand governments across Europe to declare maritime workers as key workers and make fast-track crew changes possible, so that they can be finally relieved of their work after serving much longer than originally planned on board the fleet.”

Every year, European shipping contributes around €149 billion to the EU’s GDP and 2 million jobs. 76% of the EU’s external trade in goods and 32% of its internal transport of goods is carried by ships. Undoubtedly, shipping plays a major role in Europe’s economy.

Mr Dorsman continued: “To the European Council meeting on Friday 19 June to discuss the EU’s recovery, ECSA wishes to highlight that European shipping is a vital geopolitical asset to the EU, and that a strong and competitive European shipping industry is crucial for the recovery of Europe.”

Please help us spread the message about the role of maritime workers and of European shipping by using the hashtags #EveryShipmentCounts and #EUCO on social media: